In order to give you a better service AQUASYS uses cookies. If you continue we assume that you consent to receive cookies on all AQUASYS websites. Here you find futher information about the data protection on the AQUASYS website.

The Gare de Lyon in Paris, one of the most important and beautiful railway stations in Europe, is now protected with high-pressure water mist from AQUASYS. The system was installed together with local and long-term partner Uxello Risque Spéciaux and has now been officially approved.

The installation of the system in the main hall of the station started back in 2016 and was carried out in several roll-out phases and partial commissioning. In order to prove the effectiveness of the high-pressure water mist, the concept is based on general fire tests according to the risk classification as well as an independent CFD simulation by an approved body.

Due to the building remodelling and the opening of new shops in the station's listed gallery, additional fire loads emerged that could endanger the historic supporting elements in the event of a fire. It was not possible to install the water-carrying pipes required for fire-fighting on the existing walls of the hall. Therefore, Uxello Risques Spéciaux and AQUASYS developed specially manufactured steel girders with built-in nozzles for fire fighting, which cools the hall structure in case of fire. Naturally, they were adapted to the architectural setting of the railway station here.

Function:
The system is operated via pilot valves. This allows several water mist-generating nozzles to be supplied simultaneously when the activation nozzle equipped with a small glass bulb is triggered by rising fire heat. The simulations proved that the water mist generated by the side wall and the hanging nozzles in the event of a fire protects the hall structure well from heat radiation.

Of course, the project partners paid special attention to the fixing of the nozzle pipes to the beautifully designed and historic wall elements and supports. The partially prefabricated piping system and the individually matched steel supports enable an innovative solution with as little aesthetic impact on the historic building as possible. The central pump unit installed in the station's technical room is supplied via the public water supply and buffer storage. Compact and maintenance-free high-pressure pumps generate a nominal pressure of 100 bar in the system in an emergency. 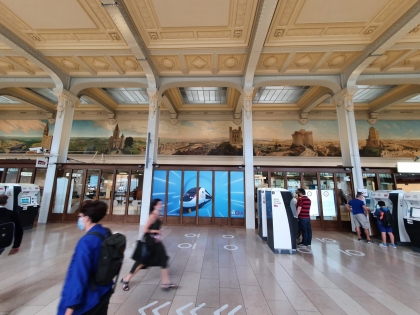 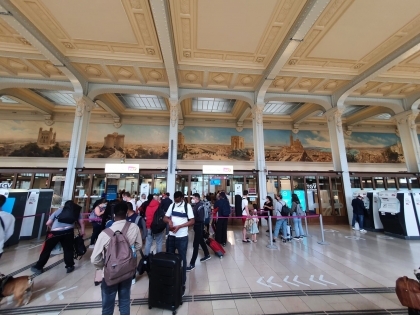